Japan is one of the most earthquake-prone countries in the world. Many earthquakes occur every year, and it is considered that a huge earthquake could occur in the Nankai Trough or directly under the Tokyo metropolitan area in the near future. However, despite the efforts of seismologists, useful forecasts of earthquakes have proved elusive.
The recently discovered phenomenon of slow earthquakes has attracted scientific attention because it may fundamentally change our understanding of earthquakes. During an earthquake, underground rock ruptures quickly, radiating strong seismic waves that shake the ground. During slow earthquakes, the underground rock also ruptures, but slowly, so the shaking is very weak (Fig. 1), sufficiently weak that these earthquakes have been overlooked until this century, with the development of highly sensitive instrumentation for seismic detection. Research during the last two decades has discovered slow earthquakes in various regions worldwide (Fig. 2) and has established some of their characteristics. However, their relationship to the occurrence of huge earthquakes, a topic of paramount concern, is not well understood. Therefore, we have launched a research project to broaden and deepen our understanding of earthquakes ranging from slow earthquakes to fast (ordinary) earthquakes. This is a Grant-in-Aid for Scientific Research Project [Grant-in-Aid for Transformative Research Areas (A)] of MEXT, Japan, entitled “The Science of Slow-to-Fast Earthquakes”. 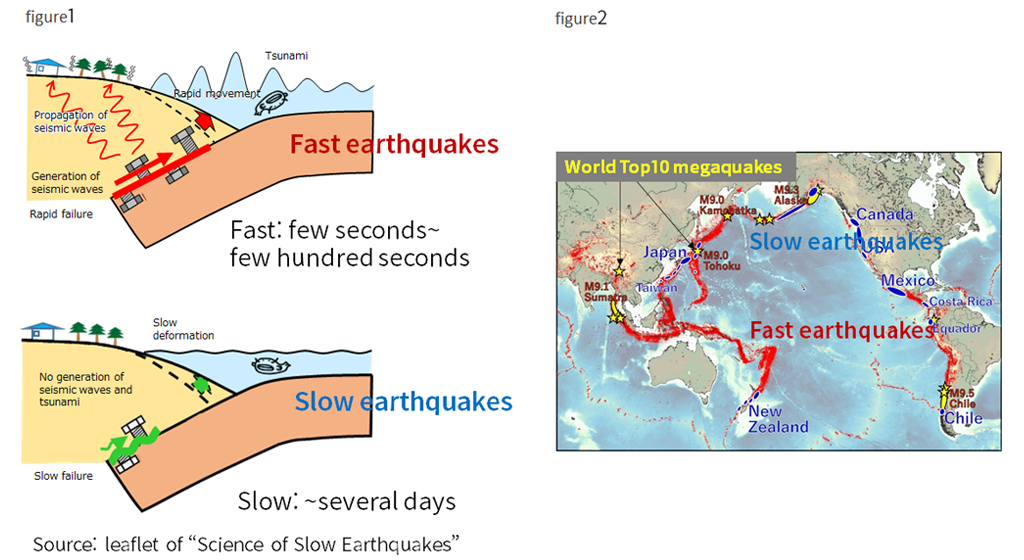 Researchers from various fields will participate in this research area. In addition to seismologists, scientists with specific experience in slow earthquake investigation will be involved in this project, including studies of geodesy using GPS and other instruments, geology and geochemistry to understand the materials in places where earthquakes occur, and basic physics to clarify the laws of friction and fracture. In addition, engineering researchers who are developing new observation techniques and researchers in information science and statistics with expertise in data science will also newly participate. To enable these researchers from various fields to collaborate effectively, six planned research subgroups have been established in the research area (Fig. 3). These are the A01 Physicochemical Processes Group, A02 Structural Anatomy Group, A03 International Comparison Group, B01 New Technology Observation Group, B02 Information Science Group, and B03 Modeling and Forecast Group. In addition, we are calling for publicly offered research proposals every two years. Approximately 100 researchers, and many students who will lead the next generation of scientists, will work within this five-year-long research project to understand both slow and fast earthquakes and better forecast their future occurrence. 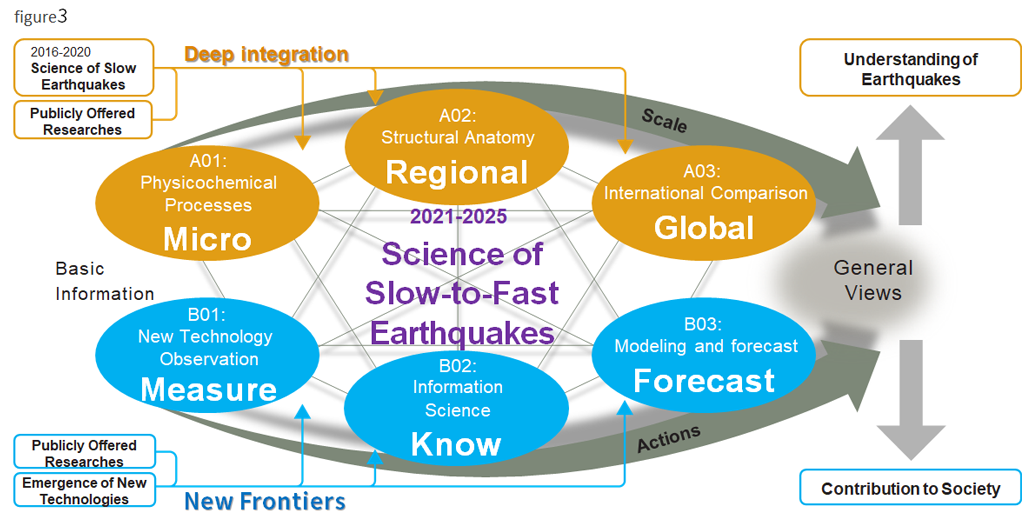 X00 Administrative group of the project 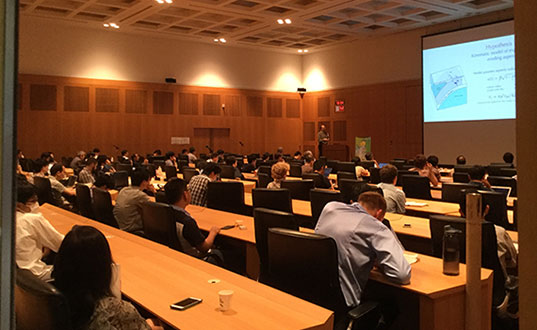 The administrative group of the project includes the head investigator of the research area and the principal investigators of the planned research (group leaders) and is responsible for the following activities:
– Maintenance of the communication system (web pages, mailing lists, and SNS) within the research project
– Management of shared databases
– Publicity and publication activities (e.g., newsletters, publications, and leaflets)
– Scientific meetings (e.g., annual international joint workshop, fieldtrips, and casual meetings)
– Overseas workshops (e.g., bi-country meetings)
– Session proposals and booth management at domestic and international conferences
– Young researchers and diversity projects (e.g., young researchers meetings and mentoring)
– International exchange of researchers
– Liaison with other research projects, local governments, and Geopark projects.
Administrative work related to the activities will be carried out by the secretariat in the office of the administrative group, which is located at the Earthquake Research Institute of the University of Tokyo.

The aim of Group A01 is to understand how fault slip begins and propagates into a wide range of earthquakes, including slow-to-fast events. Elucidating this mechanism from micro fundamental processes is required for generalizing, modeling, and predicting catastrophic seismic events. Recent investigations have found that the presence of water has a significant influence on the elementary processes of slow-to-fast earthquake generation and development. However, the specific effects of the fluid or the heterogeneity and scale-transformability involved in the extension of the fundamental processes to fault slip at the macro scale have not yet been clarified. This research group will conduct laboratory experiments, including friction and compression tests, chemical analysis, and structural analysis, as well as numerical experiments based on non-equilibrium physics and elastodynamic modeling, to elucidate seismic slip processes in the presence of fluid and scale–shape effects and to model the elementary processes of slow-to-fast earthquakes. Results of these analyses and experiments will be output for comparison with natural phenomena and for large-scale modeling in other research groups with the aim of understanding the underlying physico-chemical processes of generation mechanisms of slow earthquakes and the transition to and development of fast earthquakes. 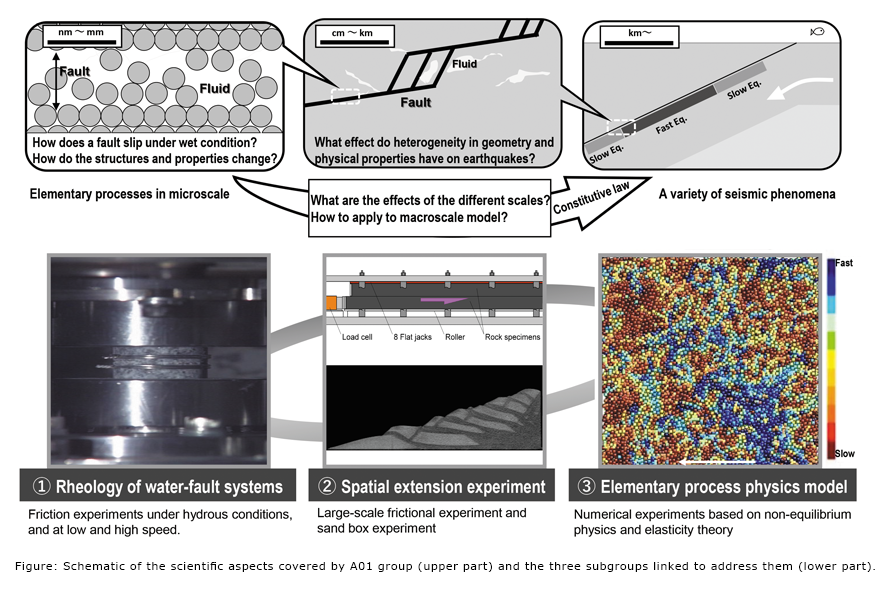 The A02 Structural Anatomy Group will quantify the structure and changes in the state of the source regions of slow-to-fast earthquakes (slow-to-fast seismogenic zones) with unprecedentedly high spatio-temporal resolution. By combining precise imaging of subsurface structure, monitoring of changes in physical properties by geophysical observations, deciphering of earthquake histories and fluid traces in rocks by geological material research, and the latest findings of chemical analysis, experiments, and simulations, we aim to understand the behavior of materials and fluids that characterize slow and fast earthquakes, as well as the preparatory process for the occurrence of fast earthquakes. We have selected southwestern Japan (especially the area of Kii Peninsula to the Nankai Trough off Kumano), which has received the greatest amount of research attention both onshore and offshore, as a test field, and will integrate observations and material research from shallow to deep regions in cooperation with other groups. It is expected that the fusion of geophysics and geology will enable us to create a live map of the fluids that cause earthquakes, which will be supported by results from material science. In the test field, there are concerns about the potential occurrence of Nankai Trough earthquakes, which we intend to address. We will also work to disseminate our research results to both the scientific community and the public in cooperation with Nanki-Kumano Geopark.

Both slow and fast rupture processes on a fault are commonly observed within seismogenic zones worldwide, as well as in subduction zones in the Pacific Rim. Similar rupture processes with time scales from slow to fast have also been observed during volcanic eruptions. Group A03 aims to identify the factors that control such slow and fast rupture processes during earthquakes and volcanic events in subduction zones worldwide on the basis of results obtained from onshore and offshore seismic and geodetic observations, geological fieldwork, and information on core materials obtained from ocean drilling projects. We will attempt to highlight the novel achievements of comparative subductology in the science of slow-to-fast earthquakes, in collaboration with interdisciplinary scientists within the fields of seismology, geodesy, volcanology, geology, and geochemistry. With a focus on discriminating both globality and regionality controlling slow and fast rupture processes through comparative subductology, we aim to construct aon overall pictures of these two end-member rupture processes and to conduct modeling of the processes. 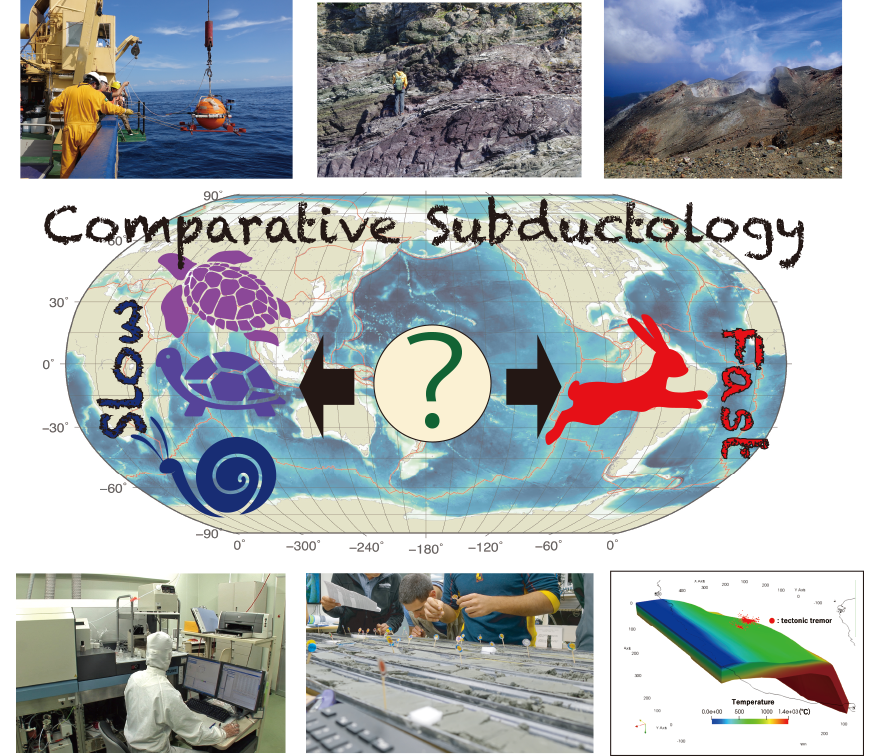 Observational data form a basis for predicting geophysical phenomena. In Japan, the development of dense geodetic and seismological observation networks led to the first discovery of slow earthquakes. However, the existing observation networks are limited in the sense that each observational technique has a specific spatio-temporal band, by which only the discretized nature of a geophysical phenomenon can be observed. In particular, instruments that have sufficient precision to observe slow phenomena such as slow slip events are small in number, causing gaps in spatio-temporal coverage. Therefore, the full picture of how slow phenomena transition to fast phenomena remains unclear. To reveal an accurate picture of the transition process and to construct a prediction model based on such a picture, we are developing multi-scale observation techniques that allow seamless observations with respect to spatio-temporal coverage, making use of optical and ocean engineering. Specifically, we are developing an absolute gravity measurement method to effectively assess underground fluid migration, a highly stable and precise fiber sensing method to capture a wider range of earthquakes including slow slip, an ocean-bottom geodetic measurement system with high temporal resolution, and a seismological observation system in an ultra-deep marine environment near a trench to observe slow-to-fast earthquakes. 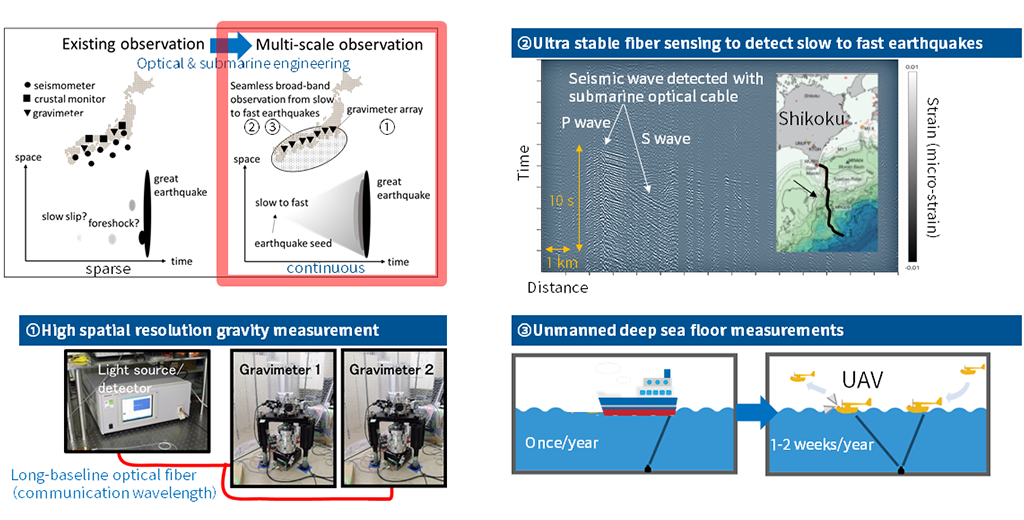 B03 Modeling and Forecast Group